In 1973 Charley Reuvers’ former wife suggested he create a graphic novel based on the libretto of Jean Cocteau’s play Les mariés de la tour Eiffel. The lyrics of the libretto were published in an edition of Les Oeuvres libres, a yellowed booklet from 1923 that Charley had given his ex wife as a present. A graphic novel? Why not? In Reuvers’ view, the text of the surrealistic poet was still as expressive as it must have been over fifty years ago, and would lend itself perfectly for an adaptation, since it was not too long. 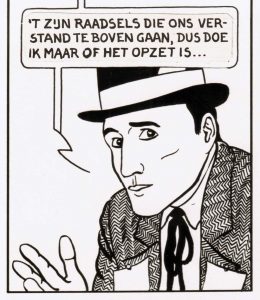 These riddles are beyond all comprehension, so I act as if all things happen intentionally

Jean Cocteau’s Les mariés de la tour Eiffel premiered in 1921. The play, which is set in the early 1920’s, consists of a series of absurdist scenes and events that occur at the site of the Eiffel Tower on the fourteenth of July.

A local photographer and a hunter in a lightweight suit try to catch an ostrich that has escaped from the photographer’s camera. When a wedding party arrives at the tower to pose for a group portrait, a toddler emerges from the apparatus and turns out to be none other than the bride and groom’s child. In the next shot, all members of the wedding party simultaneously disappear into the camera, the hunter misses his train, a winged dare-devil prepares himself for a nose-dive, and the closing hour of the Eiffel Tower is announced.

The constant absurdist turns of the play caused great indignation among the audience, but there were also spectators who enjoyed themselves splendidly. The premiere turned out to be a total fiasco, a great success and a major scandal at the same time.

From the very beginning, Charley appreciated that the Eiffel Tower, or at least parts of it, had to be depicted in almost every picture from almost every conceivable perspective. He realized too, that his know-how of perspective drawing, as acquired at the Gerrit Rietveld Academy, would not suffice. Through an acquaintance, he met Mr Mesman, a former instructor of perspective drawing at the Rijksacademie, who had been compelled to give up teaching due to a disorder of the eye.

For his tutelage, Reuvers had to visit Mr Mesman at his place. Mesman had made perspective drawings of industrial structures for the German occupiers during World War II in order to be exempted from Arbeitseinsatz. As a self-educated draughtsman, he had developed a system of his own, and now, in the twilight of his life, the nearly blind Mr Mesman explained it to his eager pupil by means of two schematic sketches on an A4 sheet. It was Mesman’s system for perspective drawing that enabled Charley to create his graphic novel.

Accurate to the Last Bolt and Rivet 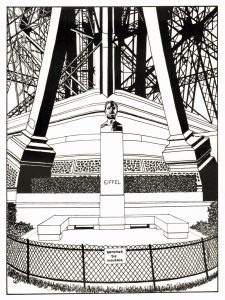 For the conversion of Cocteau’s libretto to a graphic novel, it was necessary, among other things, to keep the text and images balanced and, therefore, to shorten and/or leave out the longer, more descriptive parts of the lyrics.

One striking feature regarding the expressiveness of the end result is the pronounced three-dimensional effect of the drawings, which resulted from the extreme perspective and the refined fullness of detail. Steel constructions, meshed railings, the herringbone texture of the photographer’s suit… these elements and components have all been drawn with exquisite precision. A fact that is quite remarkable in itself, if one realises that Reuvers applied a paint brush.

Stylistically, Reuvers was influenced by Winsor McCay, Will Eisner and Lyonel Feininger. His greatest idol, however, was Jacques Tardi, and just like his idol Reuvers went to great lengths researching his subject. He organized files with examples of the suits and objects from the 1920’s that appear in the story. Wanting to leave nothing to chanve, Reuvers paid regular visits to the library of the Maison Descartes in Amsterdam. He also went to Paris to take pictures of the Eiffel Tower, and to study the blueprints of its construction in the Bibliothèque nationale de France. It is not an exaggeration to state that Charley Reuver’s representation of the Eiffel Tower is accurate to the last bolt and rivet.

In general, Reuvers remained faithful to the text of the libretto, but every now and then he took the liberty of doing things differently. During his research into the Eiffel Tower, it dawned on him how brilliant Cocteau’s choice had been to locate his absurdist play at the tower. As a landmark, the Eiffel Tower had always been a great attraction for fools, dare-devils and suicides.

Reuvers underlined the unique spirit of the setting, l’esprit de lieu, by adding to Cocteau’s 1920’s script a number of references to bizarre events that had occurred much later. And thus, we encounter a charming bicyclist whizzing down from the tower on her way to Chatou, and – in response to more recent newspaper footage – protesting shepherds and their flock of sheep with Save Us painted in purple on their fleece being scattered by the French riot police (CRS) under the base of the Eiffel Tower.

In 1926, the aviator Leon Collet tried to fly through the base of the Eiffel Tower in order to impress his brother who lived nearby. Collet’s plane collided with some loose cables from a radio antenna and crashed against a shop-front. In reference to this event, Charley inserted a similar incident into the story line.

In order to document himself properly with regard to the airplane that he wanted to draw for Collet, a Spad 13, Charley visited the headquarters of Air France in Paris. When the female archivist learned the reasons behind Reuvers’ need for the airplane images, she burst out: ‘But it wasn’t a Spad 13 at all; he flew a Breguet 14!’ Deeply impressed by her detailed ready knowledge, Reuvers found it hard to hold on to the Spad, which in his eyes was a much better looking plane. 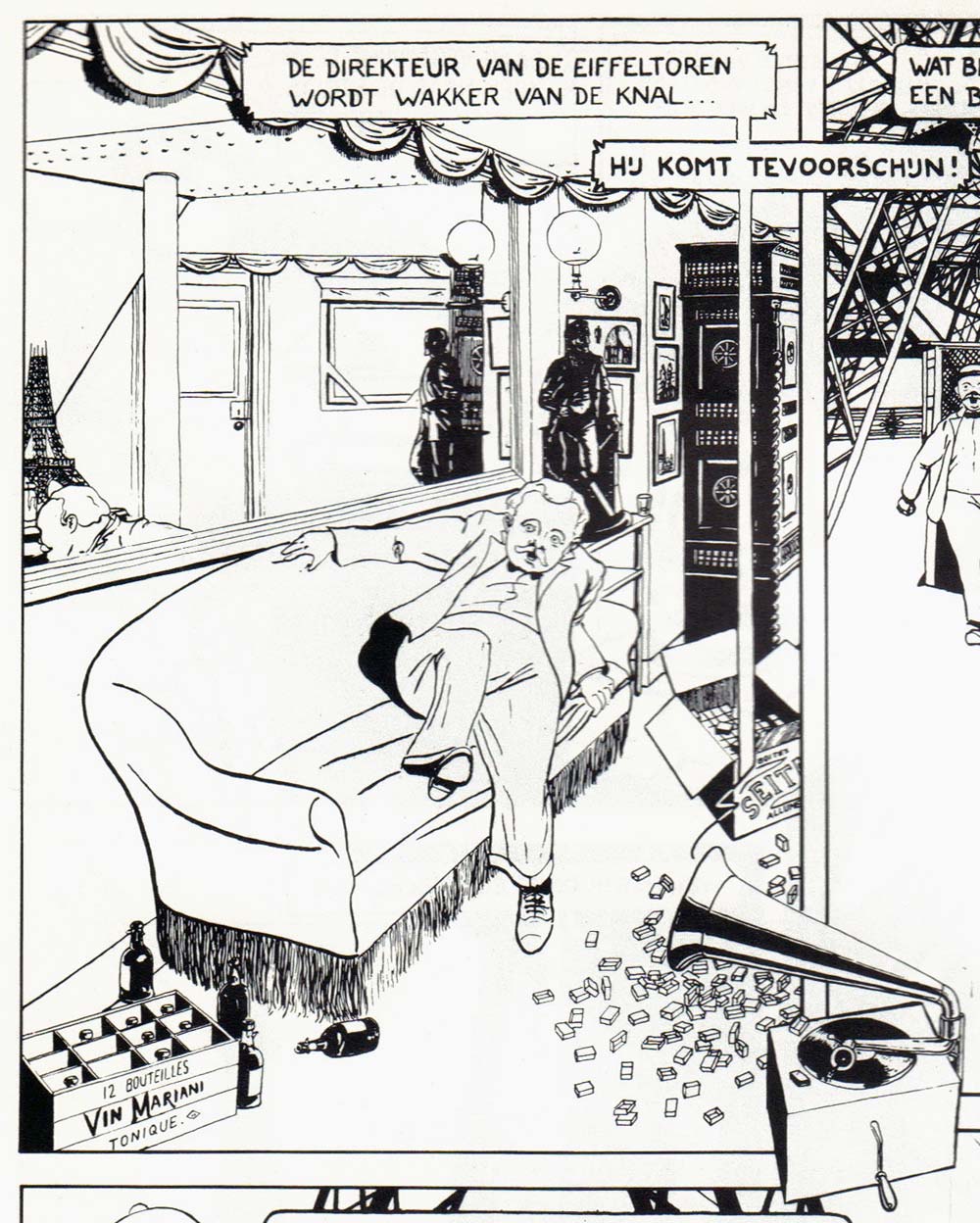 the director of the eiffel tower awakes, he makes his appearance

In Cocteau’s libretto, a wealthy American purchases the wedding party as a conceptual work of art. Charley placed this art-lover on top of an elephant because, until today, nobody has ever mounted the Eiffel Tower on a pachyderm’s back. And because the general manager (of the Eiffel Tower) acted as a gallery owner during this deal, Reuvers fashioned him after the gallery owner who used to live across from him. To push the analogy a bit further, the manager makes his debut in the story with a crate of Vin Mariani, a coca wine, next to his couch. In the mirror on the left, we see a reflection of the Eiffel Tower under construction made of matches of the brand Seita, while the floor is littered with empty matchboxes. 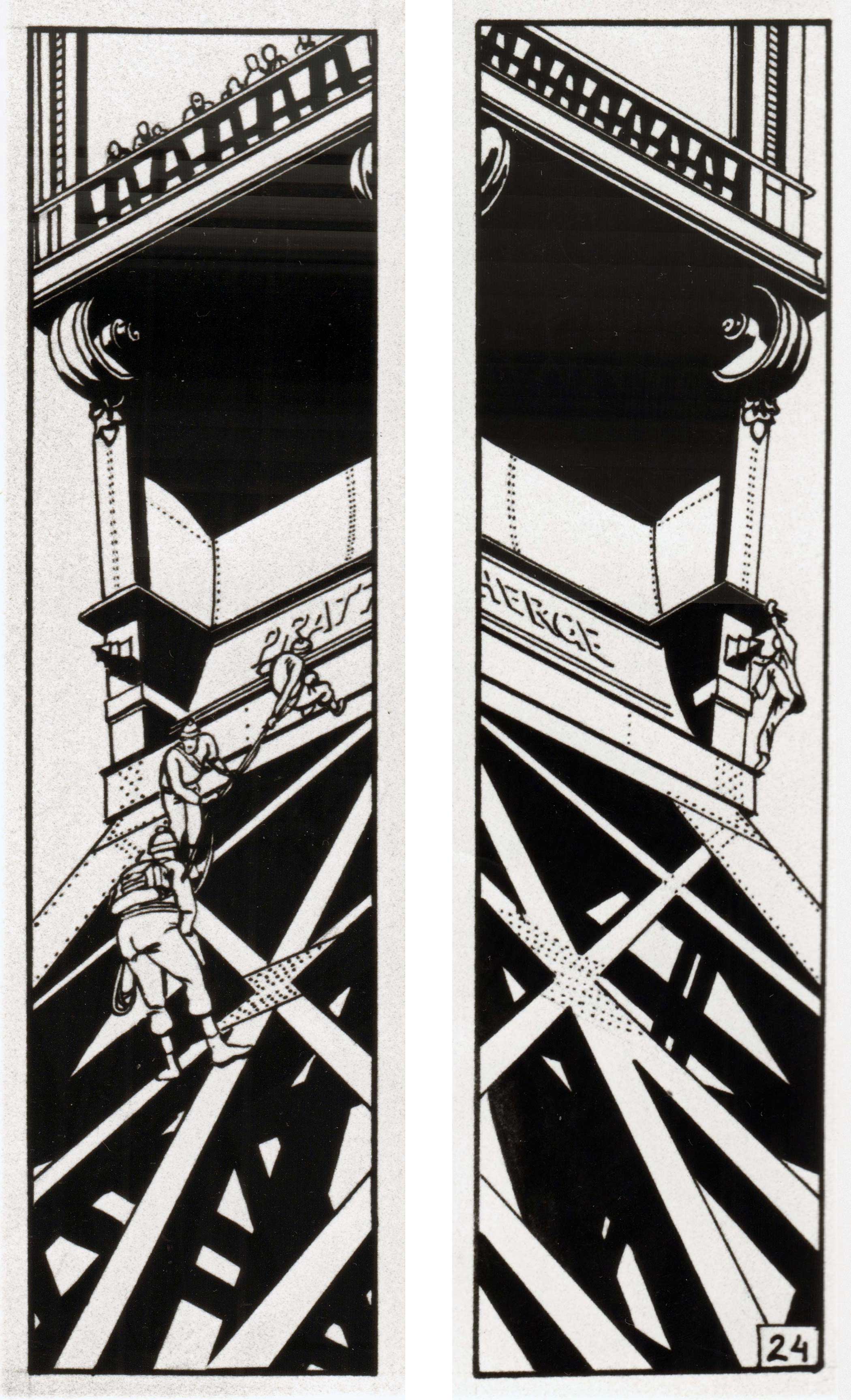 Occasionally, Reuvers added details to the story as a tribute. For example, Charley devoted a whole page to a portrait of Apollinaire, whose celebrated poem is depicted in the form of the Eiffel Tower. Likewise, Tintin appears twice in the background as a reporter. There are many more similar additions that only attract attention after closer examination, like the dapper mountaineers, the congratulatory telegrams that are folded like little birds and served at the banquet, and the names of scientists admired by Gustave Eiffel that decorate in riveted script the edge of the first floor of the Eiffel Tower. Reuvers had substituted the scientists’ names with the names of strip cartoonists.

As the visual and expressive adaptation of a literary work, Het bruidspaar van de Eiffeltoren – The Wedding Party on the Eiffel Tower – is a precursor of Reuvers’ later series on Moby Dick. But there are other similarities with regard to the scale and duration of the project. Out of the seven years that Reuvers worked on the graphic novel, he needed three years for research and preparation. Between October, 1977, and December, 1980, Reuvers’ homage was published in twenty parts in the bimonthly magazine De Revisor, completed with a translation by Peter Verstegen.