After rounding off the Moby Dick period, Reuvers resolved to work more spatially. It was the next step in the direction he had already taken in the last series by combining painted images with three-dimensional objects. Reuvers decided to create show-boxes, since this allowed him to expand his repertoire of techniques concerning the trompe l’oeil effect with the manipulation of light and the application of forced perspective, repoussoirs and mirrors to suggest more depth. 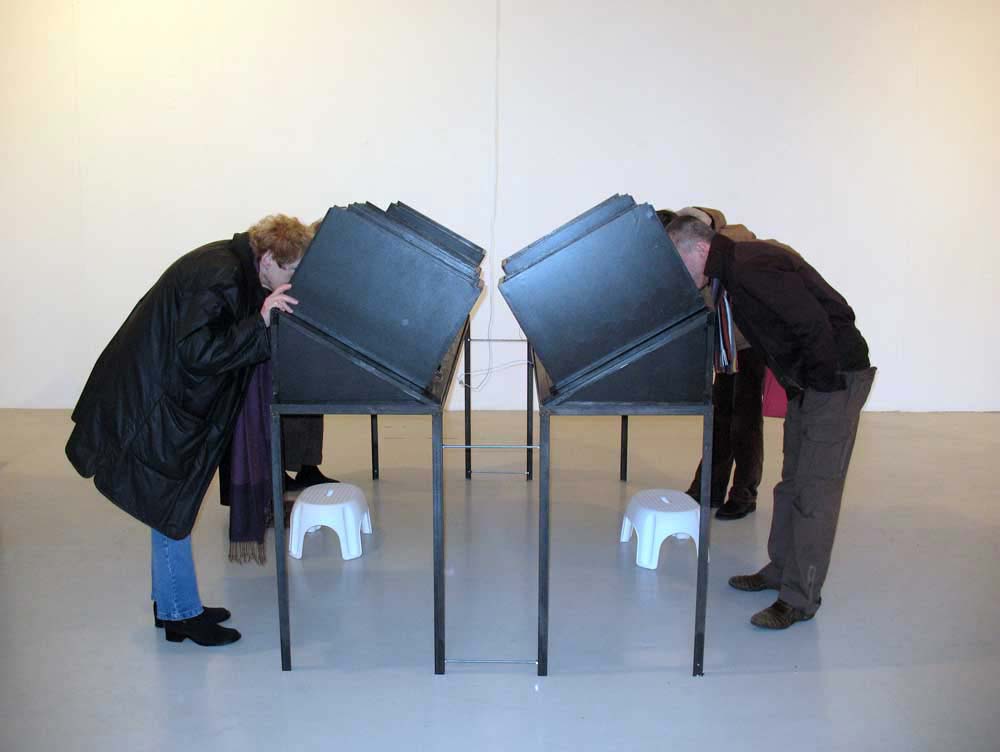 The Human’s Eye Field of Vision

Reuvers wanted the show-boxes to be both easily manageable and not too small, so that he would have enough space to work. The black-painted wooden boxes are on average 50 x 40 x 30 centimetres and have a 2-cm peephole. That diameter exactly matched the optimal field of vision of the human eye. Although you do not get a stereoscopic view of the representation inside the box, you do not notice because your brain automatically supplies the deficient visual information.

A couple of centimetres behind the peephole is a black passe-partout that hides the rear corners of the show-box from view. Through the passe-partout, the viewer sees a representation that is illuminated by day-light, which falls through a translucent synthetic sheet on top of the box. In many instances, reflective coloured sheets, which are attached to the reverse side of the passe-partout, lend a special lustre to the light, and induce an atmosphere similar to the break of day or a warm day in September.

Reuvers experimented extensively with artificial light. In Show-box 12, Morning, Issy-les-Moulineaux, for instance, a pink glowing cathode tube evokes the peep of dawn while LED lights create the illusion of the head lights and interior lighting of a bus, and the street lights under the bridges.

A repoussoir is a painting technique in which a dark object, or a part of it, is placed in the foreground so that the rest of the representation seems to give way and a greater depth is suggested. Reuvers regularly applied this technique in his show-boxes. It can be twigs and branches, tram rails, a wire, a piece of a chopper or the sign ‘ZONA’ in the show-box on Chernobyl.

Another technique to suggest depth is by means of forced perspective and extreme differences in scale. In the show-box Thursday, the scale of the chopper in the front is 1: 48, and that of the houses on the background is 1:200. To determine the proper perspective, Reuvers used an inexpensive laser apparatus to lay down the horizon, and pinned down coloured threads to bring everything into perspective. In Autumn, Oosterbeek, Reuvers managed to conjure up a ten-metre tunnel within a two-centimetre space.

Reuvers often used mirrors to create spaces that do not really exist. In the show-box Saturday, we see a truck to the right, which in effect is on the left, directly on the reverse side of the passe-partout. The ambition to find solutions for technical problems that resulted from the creation of an illusory spatiality, as well the desire to try out new things, often led to the production of new show-boxes.

Reuvers grew up in Amsterdam in the 1950’s. World War II was over and done, yet its effects lingered. Each family had its share of stories of what had happened: the winter of starvation, the violence, traitors… Reuvers’ mother, who grew up in Goor, told stories about V2’s being launched from a place near their back garden, and about the Polish soldiers who freed Goor and courtly kissed her hand. As a boy, Reuvers saw army trucks with explosives, led by a vehicle with a red flag, driving by his parents’ place. During school trips, children were admonished not to leave the beaten tracks in the dunes because of the risk of left-behind land mines. From time to time, a fisher would dredge up an anti-personnel bomb or a fishing boat would get blown to smithereens. During their primary school days, a class-mate of Reuvers blew-up himself and a friend while examining a shell in his sleeping room.

Ruins of the Jewish Quarter

At the age of thirteen, Reuvers discovered the archive of the Jewish Historic Museum. The history of the Jews during World War II made a profound impression on him. Places and streets that he thought he knew like the back of his hand, such as the Central Station, the Hogeweg and the alleys of his neighbourhood, took on a new meaning.

At that time, the ruins of the Jewish Quarter had not been demolished yet, and their sorry sight made him feel as if the war was not over at all. This background might explain why most show-boxes deal with subjects related to war: scenes from World War Two, but also from the wars of the Balkans, Iraq, Viet Nam and Afghanistan. Sometimes they would be represented as a still from a news broadcast by Al Jazeera, but predominantly as a reconstruction based on photographic materials that Reuvers gathered regarding specific themes.

Several scenes are reconstructions based on literary fiction, such as Wednesday, the Bread Van, which is based on Solzhenitsyn’s In the First Circle, and End and Beginning, which is based on an eponymous poem by Wisława Szymborska. The motto of her poem is that somebody must always tidy away the mess in the end. A striking feature of the buildings and streets in Reuvers’ show-boxes was the remaining rubble and mess of war.

The scenes of the show-boxes barely show any direct action, instead, they focus particularly on the ‘day after’, the silent witnesses that remained after the events; for example, the packs of wild dogs which fed themselves on the corpses that were left behind on the beaches after the disembarkation of the British troops at Dunkerque. Reuvers is especially interested in the often concealed second or third layer of wartime: empty shop-windows, bicycles that are commandeered by the Germans, the Serbian petrol traffickers, streetwalking, the black market in Vienna and Berlin in the wake of the war.

Some show-boxes are based on Charley’s reminiscences of boyhood, like the laying of the Christiaan Huygensplein in Amsterdam in 1955 in Monday, the accident with a company truck in De Snelle Visser, and the nodding donkeys in The Sisters. The great number of civil and military vehicles, submarines and choppers demonstrate Reuvers’ passion for technique and model making, and the abundance of bicycles reveal his roots as a citizen of Amsterdam.

Show-boxes – the peep-show form in particular – exude a magic attraction, as though you can exercise power over an object by making it into a model, like with a Voodoo doll. But there is more to it. In The Music of Chance by Paul Auster, a scale model is mentioned of the house where the main characters dwell; in this model house, there is a workshop that contains a model of the same house on an even smaller scale. The Dutch know this magical illusion of infinity under the name of the Droste effect.

In Thursday, Reuvers shows a bird’s-eye view of his own neighbourhood, including the house where he constructed forty-one show-boxes between 2002 and 2012. If you watch closely, you might see Reuvers wave at you from his window.