At the top left, we have a top and front view of the try-works. In this stove, train oil (whale-oil) was obtained by boiling strips of blubber. We can see behind it a photograph of the stove in operation, and underneath that, an argand burner fuelled by whale-oil.

Nailed to the main-mast, the doubloon serves as the ship’s navel. A succession of crew-members study the coin furtively, and everybody recognizes something different. Starbuck, for example, sees a valley of death, where God nevertheless takes care of us, as a beacon of hope. Stubbs sees the sun among the stars as the Zodiac, and the Zodiac as a phase in everybody’s life. Flask can only think of the cigars he will be able to buy, but he makes a mistake in his calculation – seen in the top left of the doubloon. The value of the doubloon is $ 16; a sum with which one can buy 800 cigars of 2 cents. Flask reckons 960. The difference, 160, is a tenfold of the value. According to Viola Sachs, nothing happens by coincidence in Moby Dick. With Flask’s miscalculation, Melville underlines the importance of the magical square of 16 in Dürer’s print, which was mentioned in Reuvers’ first print.
And what does the lonely, vindictive, egotistic Ahab perceive? ‘Three peaks as proud as Lucifer. The firm tower, that is Ahab; the volcano, that is Ahab; the courageous, the undaunted, and victorious fowl, that, too, is Ahab; all are Ahab.’ 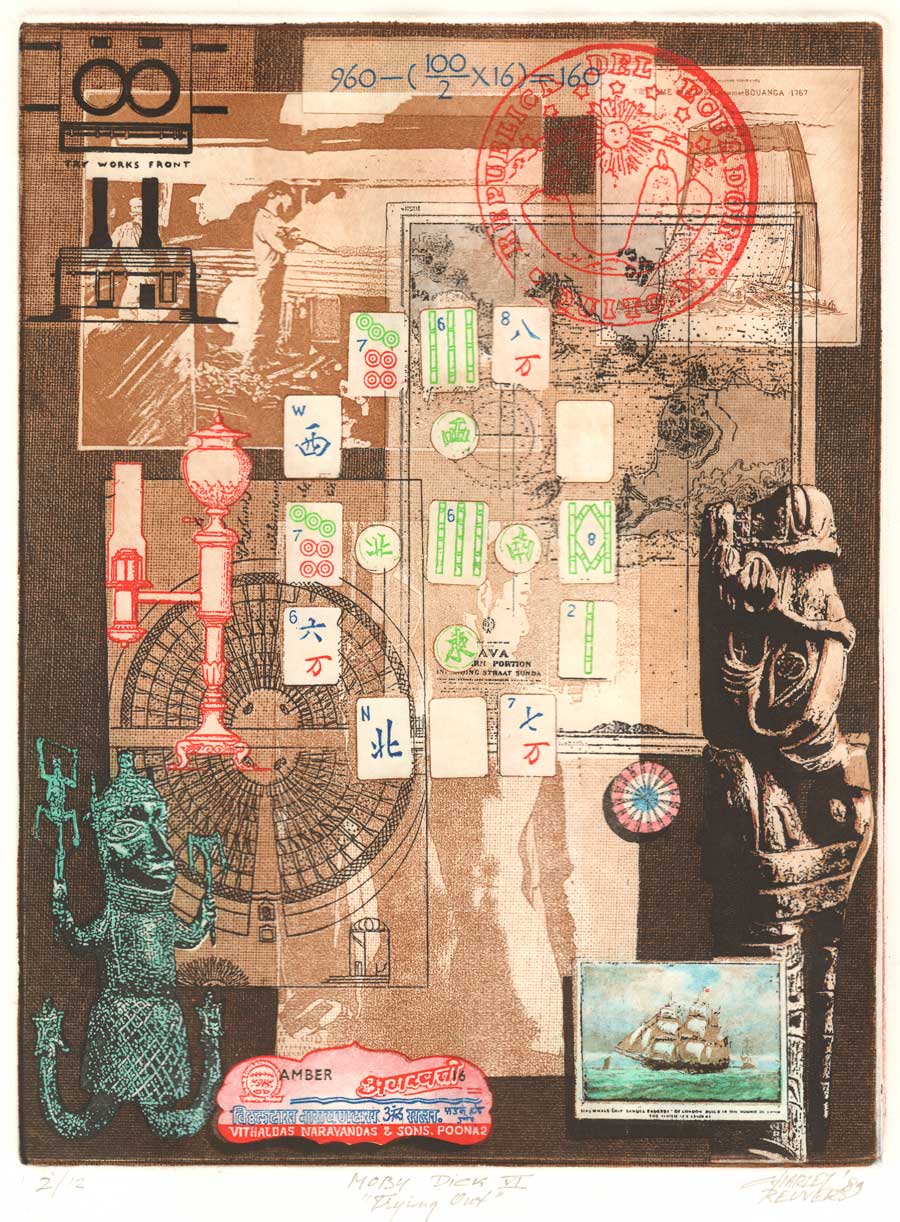 In preparation for this etching, Reuvers consulted the oracle of the mah-jong. By arranging a number of mah-jong stones randomly, the stones may answer every question. Reuvers inquired after Ahab. The figuration as represented in the centre of the print depicts the answer he had obtained: the white stone stands for a white, magical animal; the bamboo canes refer to sea voyages; and the westerly wind at 10 o’clock signifies adversity. Naturally, nothing happens by chance.
At the bottom left, the sculpture represents Ol-olum, the god of water and richness, who lives in a palace under water, and who has people and fish as servants – a reference to the negro-savage Daggoo, third among the harpooners and the squire of Flask. Next to it, in reference to the Parsi harpooner Fedallah on Ahab’s whaling boat, we see the top view of a Persian Tower of Silence. Parsi are not allowed to bury, burn, or to dispose of their dead in water, and they, therefore, build towers for excarnation – that is, for dead bodies to be exposed to vultures and other carrion birds. The sculpture to the right represents the Indian Tashtego, Stubbs’ squire. It is the handle of a stick representing a killer whale that devours a man.

When The Pequod crosses the Street of Sunda (see the map in the centre of the background), it is being chased by Malaysian pirates. At the top right, we see an image showing a prau of Malaysian pirates. Then, The Pequod meets the French whaling vessel The Rosebud (cf. the faded cockade) that has a number of stinking sperm whales tied alongside. Stubbs deceives the captain into thinking that his crew can fall ill because of the stinking whales, and the French captain decides to cut them loose. Shortly afterwards, The Pequod grabs one of the carcases, which are full of precious ambergris, just like Stubbs anticipated. Hence, below in the centre of the print, we notice the small label that is used in the perfume industry.

A squeeze of the hand

The spermaceti from the head of a sperm whale solidifies into lumps that has to be squeezed by the sailors in a large tub. The sweet aroma of the sperm and the endless squeezing, with the men squeezing each other’s hands in the long run too, sends them into ecstasies of a homo-erotic nature (see the picture bottom centre in the background).
At the bottom right, we see the English whaler ship, The Samuel Enderby, on which the captain loses an arm after an encounter with Moby Dick.