This etching concerns the crew of The Pequod. In the centre of the background, we see Captain Ahab with his ivory leg standing in a characteristic pose, as impersonated by Gregory Peck in John Huston’s motion picture from 1956. To his left, we find a photograph of the forecastle, and across it, a picture of Pip, the ship’s boy from Tolland County, Alabama. At the top centre, the star with the dollar is a pictogram of the chief mate, Starbuck.

At the top left, the photograph of a shipowner in a whalebone wigwam refers to Ishmael and Queequeg enrolling on The Pequod. One of the shipowners did not catch Queequeg’s name, and obstinately mistook it for Quohog, a shell that is used as an ingredient in the aforementioned chowder. On the left side of the etching, we see ‘the mark of Quohog’. Queequeg’s ‘signature’ is represented differently in several editions of Moby Dick. The mark in this etching has been borrowed from the Penguin edition.

Melville went whaling on The Acushnet, represented here at the bottom right. To the right, transparent in the background, is the rigging scheme of the ship.
At the top right, in red, is a drawing of all hands on deck, a petition that Melville drew up on board of the whaler for the improvement of the living conditions. 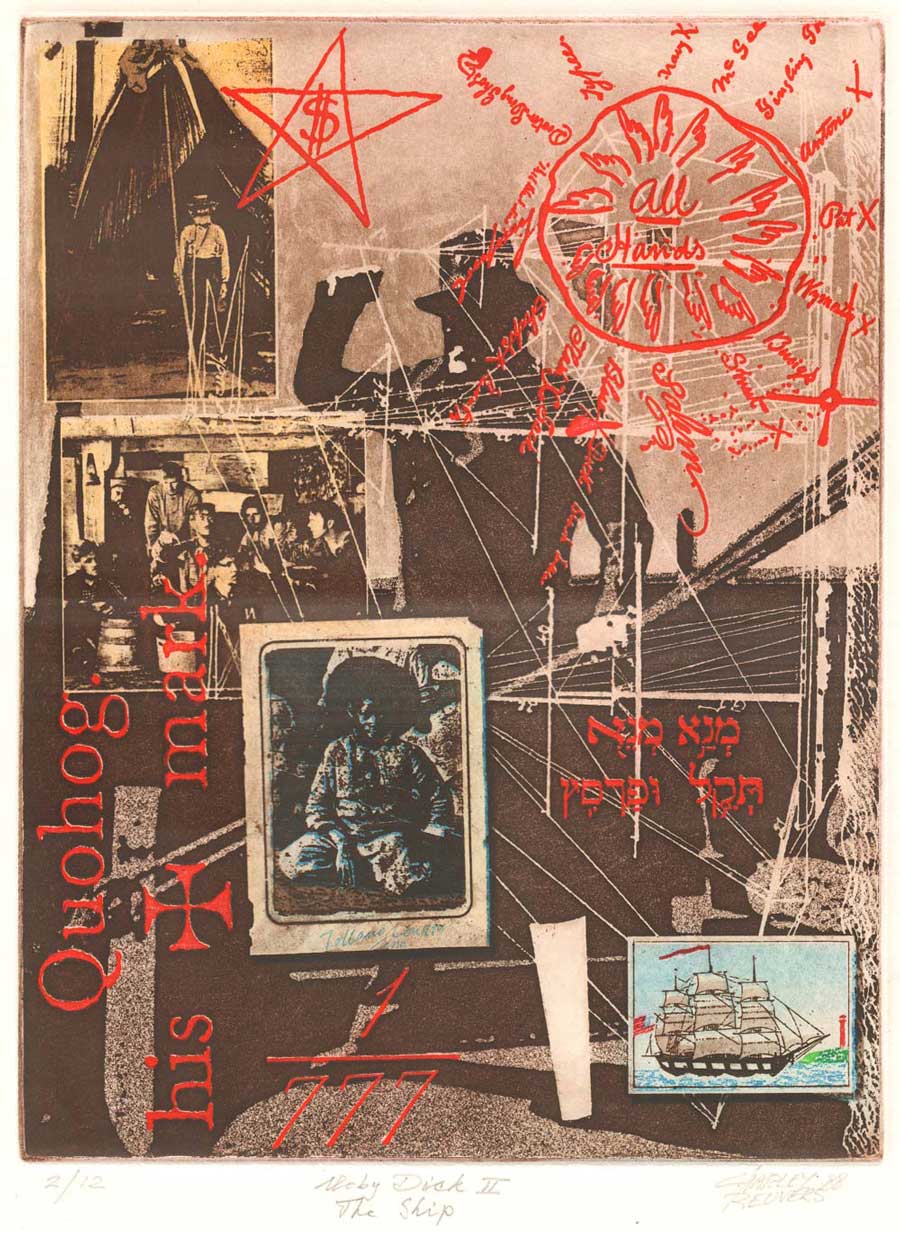 Above the image of the Acushnet is a phrase written in Hebrew: ‘mene mene tekel’, a reference to ‘mene, Mene, tekel, upharsin’, the proverbial writing on the wall (weighed and found wanting) from chapter 5 of the book of Daniel in the Old Testament.

Reuvers wanted to apply the above-mentioned phrase from the English book in Hebrew, so he got in touch with a friend who found him a Hebrew Bible through her connections.
But how to recognize the relevant passage if you do not know the language? In a photocopy shop, by coincidence, Reuvers met a man from Israel who was able to point out the passage. Sheer coincidence? In Moby Dick nothing happens by coincidence; every detail is related to larger, underlying connections. Reuvers became increasingly aware of this fact during the creation process of the etchings and paintings. Possibly, his realization is reflected most clearly in the version of the forecastle in the painting of the Anacharsis Clootz deputation, in which he incorporated the portraits of three generations of the Reuvers family.

My Substitute for Pistol and Ball (chapters 1–16), painting