The traditional illustrations of Moby Dick are usually restricted to the dramatic highlights of the book. Reuvers concentrates mainly on the attributes that Melville presents, and occasionally on some almost casual remarks. Ahab’s headaches gave him a feeling as if he wore ‘the iron Crown of Lombardy’: an iron band forged into that crown which, according to tradition, was made from a nail of the cross of Christ.

As a result of the peculiar sideway position of the whale’s eyes, the animal forms two completely separate pictures of its surroundings. Unlike humans, whales are unable to join both views to one coherent image with depth. They cannot see what is right ahead of them, and we cannot look in both eyes of the whale simultaneously. This makes the whale inscrutable.

Seen from the mouth of a whale, the methodically arranged baleens remind the author of the organ pipes in the Bavo in Haarlem. Reuvers translates this association into a picture of the church on a small Delft blue vase with Rembrandt tulips. 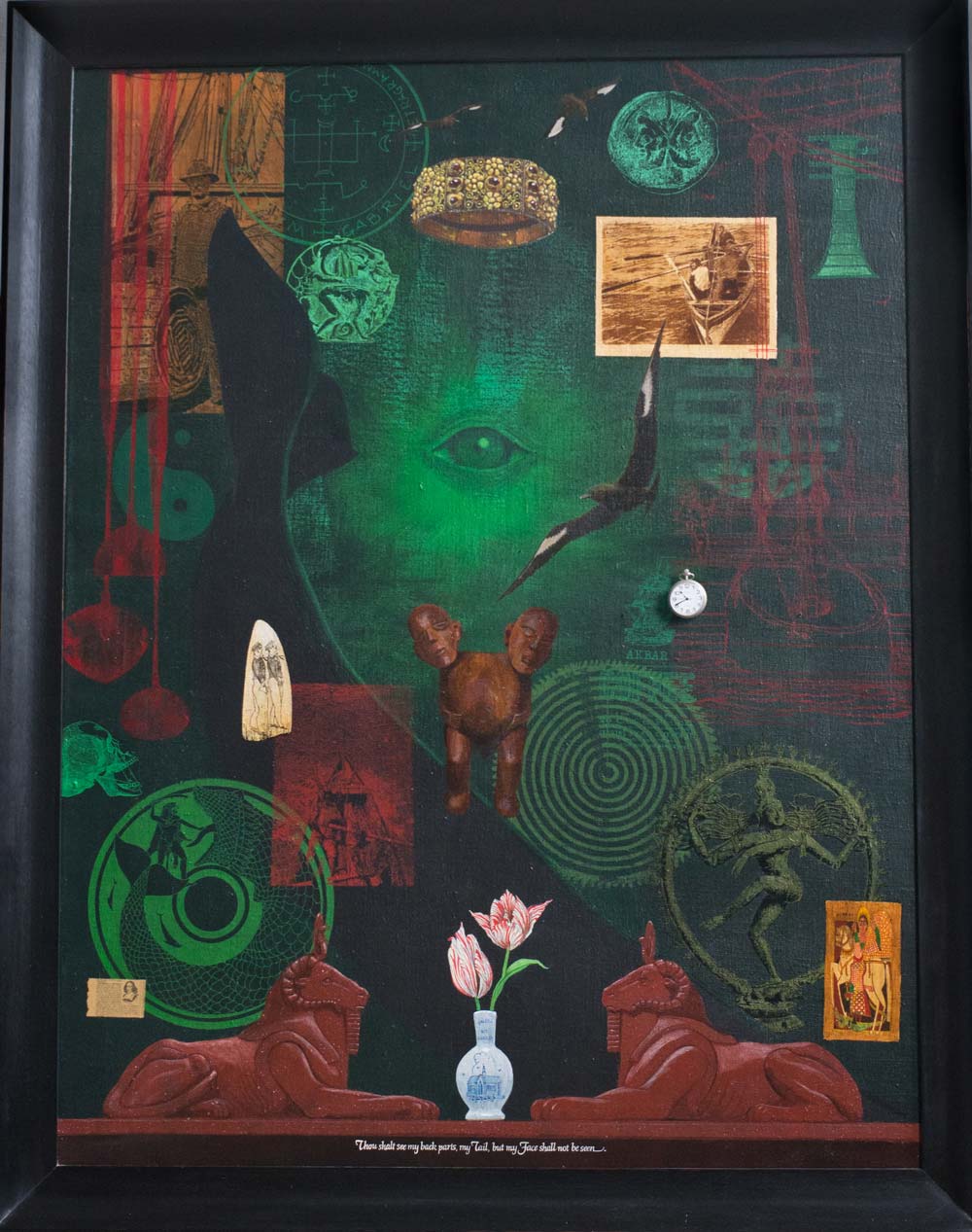 Through the Janus-face, on top, the yin and yang, bottom left, and the Tiki figurine with the two heads, the Chinese symbol for double luck and the scrimshaw of the catamites, Reuvers explores the theme of duality that imbues these chapters. His choices here show greater freedom than Heads and Tails, in which Reuvers limited himself to subjects that are literally mentioned in the book.

To the right, in the background, we see men on a monkey-rope strip the head of a sperm whale (see Heads and Tails). To the left, in the centre, we have the recurring laughing skull, and the shovels of the fat-cutters.
The photographs, top right and centre left, are stills from a documentary about whale hunting. The birds in the painting are hunters, called sea-hawks by Melville. The rams from the entrance-hall of an Egyptian temple remind us of the sphynxes. On top of the rams, to the left, we have an image of Spinoza (‘the sperm whale [I take to have been] a Platonian, who might have taken up Spinoza in his latter years’); and to the right, we have a Coptic image of St. George and the dragon. Underneath the rams, on the edge, it says: ‘Thou shalt see my back parts, my tail, but my face shall not be seen.’

Reuvers illustrates Melville’s aforementioned fascination for circles and spirals with an eye. At the top left, we see the cooper, and beneath it, we have the yin and yang sign, the crown, the Janus-face, and the hermetic seal of the archangel Gabriel (the nutter aboard of The Jeroboam). Then, we have a coin that bears the image of a man getting screwed by a monster, a statue of Shiva, and a scale with Hercules defeating a whale. To the left of that, we also see a circular Kabbala, and the silver watch of Ahab. Finally, at the top, we can see the Chinese sign for double luck.

In the top-right corner, we see the Djed, which is an Egyptian pillar-like symbol in hieroglyphics that represents eternal stability. Reuvers relates it to Melville’s condescending remarks on phrenology: to find out who he is dealing with, he would rather feel somebody’s spine than the bumps of his skull.