The Grandissimus is the jet-black prick of the whale. It is turned inside out, stretched and dried, with its pelt serving as a coat for the cutter. The cutter minces the pieces of blubber for the train pots. In the centre, left and right in the background, we see photographs of this operation.
As already stated, the paintings of Reuvers are in part assemblies with objects mounted to the canvas. With Reuvers, the Grandissimus becomes a cinnamon stick with nutmeg nuts for balls. To the right of it, between the hackers, gleams a shiny erect prick. Just like the title page of a book about masonic rituals, published in Amsterdam in 1714, the prick refers to a squeeze of the hand: the squeezing of the lumps of spermaceti. At the bottom left, the black sculpture is an antique image of a man pouring oil over his dick.

Melville describes the Grandissimus as being decent black as a cassock, and as ebony black as Pip. In an explanation about Pip’s colour, Melville states that a diamond shows its most impressive lustre when laid against a gloomy ground. ‘Then come out those fiery effulgences […] like some crown-jewel stolen from the King of Hell.’ In the top left, we see an illustration from Dante’s Inferno. Underneath, in black, in reference to the Malaysian pirates who waylaid the Pequod in the Street of Sunda, we see the shape of a monster from the Wajang Kulit puppit-shadow play. 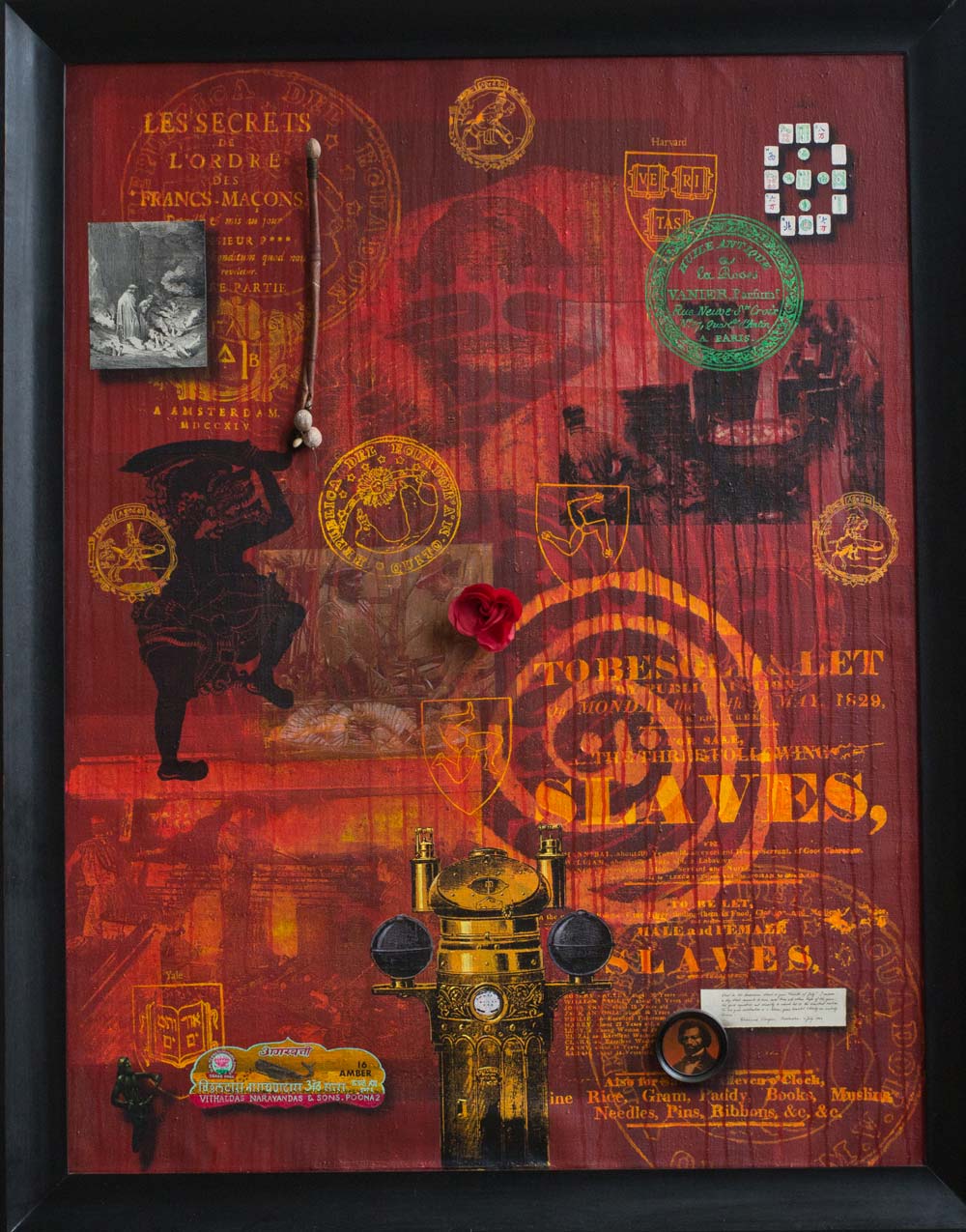 This is also a painting with many circular elements. To the far left, top centre and far right, we see the stages of life represented by clergymen with erect cocks. The younger and lower in rank they are, the stiffer their cocks. To the left, we see the 40-year old bishop; to the right, there is the 60-year old cardinal; and in the top centre, we find the 80-year old pope. They refer to the conspicuous investiture of the mincer who minces the pieces of blubber as thin as bible leaves. ‘What a candidate for an archbishopric, what a lad for a Pope were this mincer!’
The doubloon, another recurring theme of the book, appears three times in this painting: diagonally from top left to bottom right. ‘And this round gold is but the image of a rounder globe, which is like a magician’s glass, to each and every man in turn but mirrors back his own mysterious self.’
In the top right, we see a green label from a French perfume bottle, Huile Antique de la Rose; the rose also refers to the encounter with The Rose Bud. In the top right again, we see a circle of mah-jong stones that has been spread out in the try-works, just like the ambergris label, seen at the bottom left.
In the bottom right, there is a small portrait in a circular black frame which represents Frederic Douglas, a runaway slave, who started a printing shop in Boston where he published books in favour of the Abolition. Behind the portrait, we see a quote of Douglas in which he asks what the Fourth of July meant for slaves. All this in response to the description of Pip’s merry disposition and his aptitude for enjoyment and partying, which was characteristic of his race, according to Melville.
Another reference to slavery is the poster at the bottom right; its text, printed over the doubloon, concerns the sale of slaves, rice, lentils, books, mousseline and sewing things. On top of it, we see a spiral that consists of a petroglyph depicting a small man in a labyrinth.

In his description of the different types of schools in which whales swim about the watery world, the author compares a school of young males with reckless, rollicking collegians – riotous lads at Yale or Harvard. In reference to that, we see the coat of arms of those universities in the top right and bottom left.

Ahab’s ivory leg crosses paths with the white sperm whale bone arm of the captain of The Samuel Enderby. More and more at encounters with other whalers, Ahab only asks if they have seen Moby Dick. The coat of arms of The Islands of Man and Sicily with their revolving limbs refers to Manxman, the oldest sailor aboard. He is one of the many crewmen who examines the doubloon furtively and places his own interpretation on it.

Standing at the midnight helm, Ishmael stares too long into the fire of the try-works and dozes off. He awakes just in time to readjust the ship’s course. He admonishes the reader to not look for long in the face of a fire. At the centre bottom, we have the housing of the compass.