The etching is named after the pattern in which the skin of the whale is cut, depicted to the right in red, over a black-and-white photograph of whale-cutters. To the right, we have the knives that the whale-cutters use both for whale-cutting, and to defend themselves against the sharks that are attracted to the bloodbath; hence, the jawbone of a shark, which is depicted in the centre of the picture. In the oval, we see a whale hunter with a dead sperm whale and, underneath, we find krill, the feed of baleen whales. To the far left, there is a whaleboat and an inscription for Osiris from an Egyptian Book of the Dead, in reference to Melville’s comparison of the scars on the head of a whale to hieroglyphics.

Near the Îles Crozet in the Indian Ocean (the realm of the flying fish, in the bottom right), The Pequod has a rendezvous with two ships, The Albatross – Reuvers depicts this vessel with the wavy flight of an albatross – and The Town Ho. In his account of the history of The Town Ho, Melville speaks of ‘Canallers’, sailors who navigate the Grand Erie Canal. An old chart of this region is depicted in the background at the bottom right.
The crew of The Pequod is reminded of Moby Dick’s most horrific feature – its whiteness – when an impressive squid suddenly emerges from the depths of the sea, and then disappears again with a low sucking sound. For the image of the giant squid, Reuvers chose a picture from the collection of the father of Prince Reinier of Monaco. 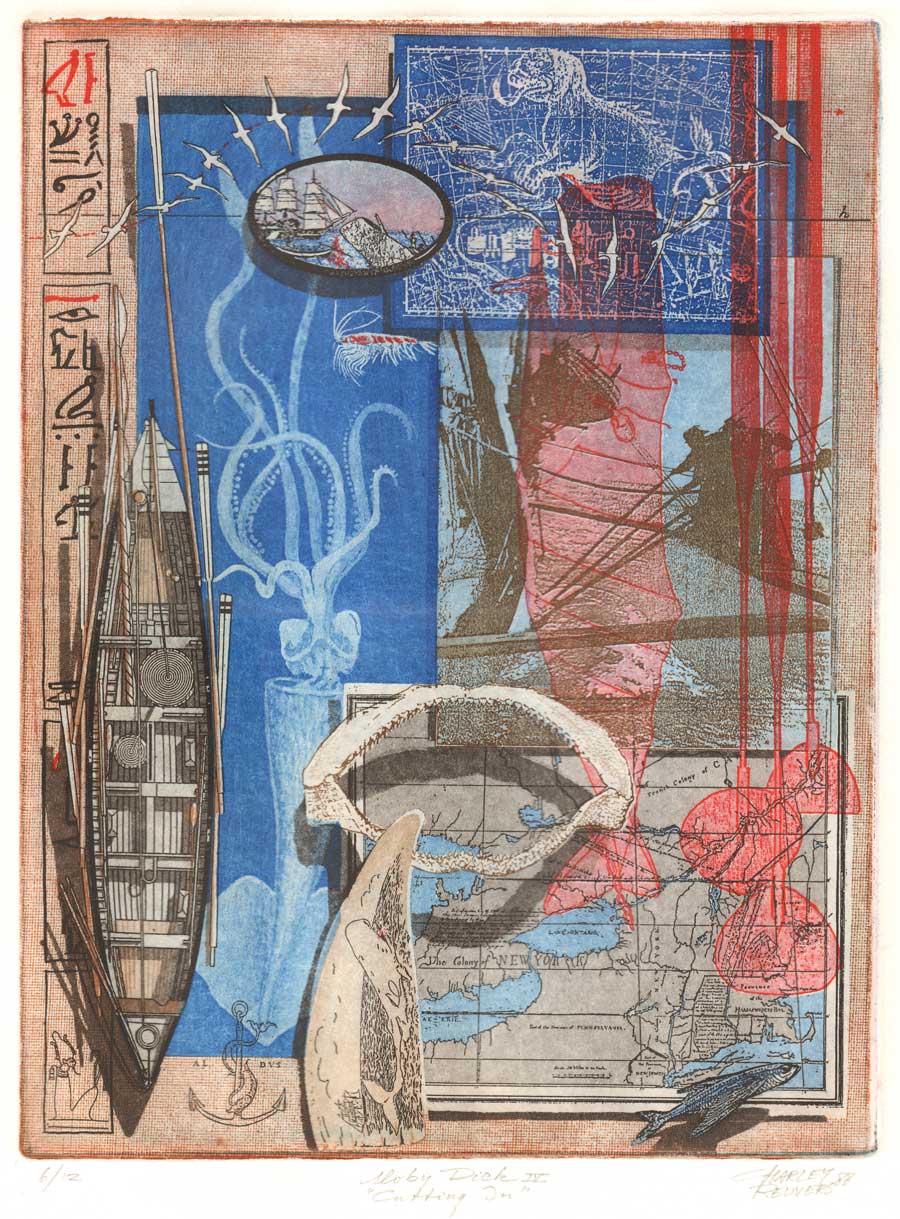 In his discourse on pictures of whales, Melville mentions scrimshaw, the traditional handicraft form of whalers. In this print, we see it as a whale cut out of a whale’s tooth. At the bottom left, the dolphin in the anchor (which represents the label of the printer Aldus Munitius that dates from Erasmus’ times) is supposedly a whale. Just like in the zodiacal sign, seen in the top right, this shows that it took a long time before people got a realistic image of what a whale looks like. According to Melville, this is even impossible as we will never be able to know how a whale really looks, in itself. The Leviathan cannot be painted true-to-life. To get even the slightest impression of a whale, a painter must go whaling himself, and take the likely risk of getting sunk by the beast.