Reuvers created the series of etches about Moby Dick when he was going through a bad patch. He had to cope with a painful divorce that had turned his life completely upside down. Gradually, he realized that the etchings were actually about himself. Was he Ahab or Ishmael? When he got the feeling that even his own etchings were laughing at him (Hah!), he understood that he badly needed an answer to this question in order to be able to complete the series. He looked for professional help. After a short but very intense therapy, he was able to convince his therapist of his recovery by submitting the final etching. Reuvers’ fear to be an Ahab was definitively averted; call him Ishmael.

The day after which Ahab trampled his quadrant, an electric discharge of a thunderstorm turns the needles of the ship’s compasses. Shortly afterwards, the ship’s log disappears into the sea when the line snaps. At the centre left, we see the log. Then, a sailor falls down from his mast-head at the fore, and the life-buoy, which is dropped from the stern, turns out to be no longer watertight and follows the drowning man to the bottom of the sea. As a replacement for the lost life-buoy, Queeqeg suggests to use his coffin. At the bottom, we see the lid of the coffin, decorated with woodcarvings in Maori-patterns. The lid is nailed down and the seams are being caulked and smeared over with pitch. 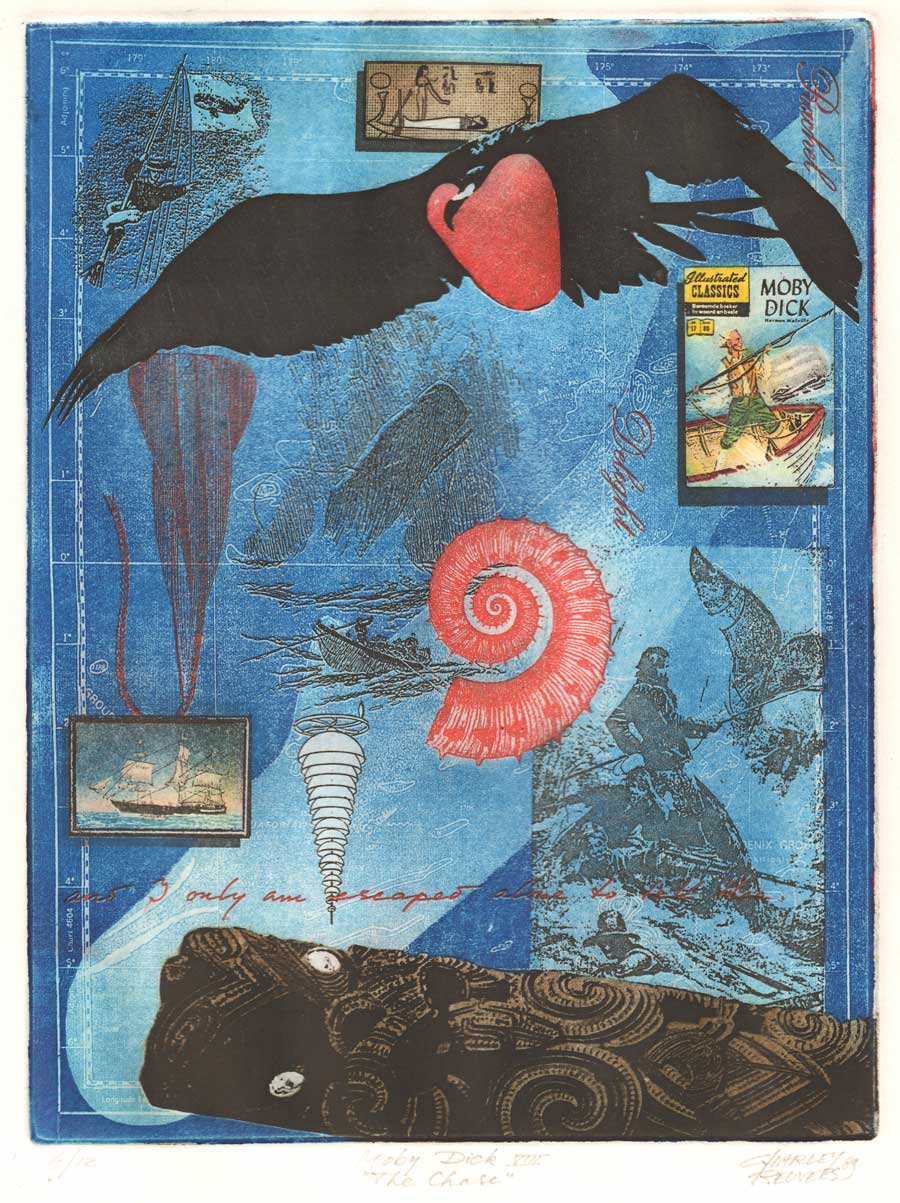 ‘This wooden mallet is the cork, and I’m the professor of musical glasses,’ muses the carpenter. The elongated triangle, to the right beneath the log, consist of the bowls of a glass harmonica, an instrument invented by Benjamin Franklin. To the far right, and underneath, slightly to the middle, we have The Rachel and The Delight, the two ships that The Pequod encountered a couple of days before the final chase commenced.

The red nautilus shell in the centre refers to the whaleboats that speed through the sea ‘like noiseless nautilus shells’ on the first day of the chase. Just like the shape of the glass harmonica and the hundreds of other circles and spirals in the book, etches and paintings, the spiral form of the shell forebodes the vortex in which The Pequod eventually vanishes.
The background of the etching is formed by a map of the region where they were sailing, near the intersection of the equator and the date line. In front of it, from top right till bottom left, we see a diving Moby Dick with 19th-century illustrations of whale-chases on both sides.
When the crew of The Pequod opens the hunt for Moby Dick on the third consecutive day, the White Whale turns against the ship and rams it. Even while The Pequod is sinking, Tashedo tries to nail a red flag to the mast. A sky-hawk, depicted at the top of the etching, tries to steal the flag, gets entangled in it and goes down with Ahab’s ship. At the top left, we have an example of a flag that would have been hoisted after a successful hunt.

‘And I only am escaped alone to tell thee,’ reads the opening quote of the Epilogue. It is taken from the Book of Job and is also cited in the etching above Queequeg’s coffin in which Ishmael, as the sole survivor, manages to keep afloat. On top of the frigate bird, we see Osiris, who has also risen from the dead, in a small boat. At the top right, we have a colour reproduction in etching technique of the cover of the Illustrated Classic, the first version of Moby Dick, which Reuvers read when he was about ten years old. By depicting it in his final etching on the subject, Reuvers rounded off a personal quest.

A Queen Ann’s Farthing (chapters 120–135, and the Epilogue), painting
Scroll to top