In comparison with The Ship, one notices that the etching (created earlier about these chapters) contains a particular increase in the number of references and visual elements. Many of these elements, such as the photograph of the shipowner in the whalebone wigwam, Gregory Peck, the pictogram of Starbuck, the little negro slave, and the ‘Mene Tekel’ inscription recur in this painting; although, they do so in a slightly altered fashion, like with the aforementioned crew in the forecastle that includes three generations of the Reuvers family. In this version, Ahab and Pip are connected to tarot cards. The card of the ship’s boy Pip, The Fool, shows a strong resemblance to a runaway slave with his knapsack.

The two mandibles on either side of the painting refer to the bulwarks of The Pequod, which were garnished with the sharp teeth of the sperm whale. On the top right of the photograph of the harbour of New Bedford we find the numbers ‘1/777’. This division represents the seven hundred and seventy-seventh part of the net proceeds of the voyage offered to Ishmael as wages. Across the harpoon, at the bottom of the painting, is Queequeg’s mark in the form of a lemniscate, the symbol of infinity. 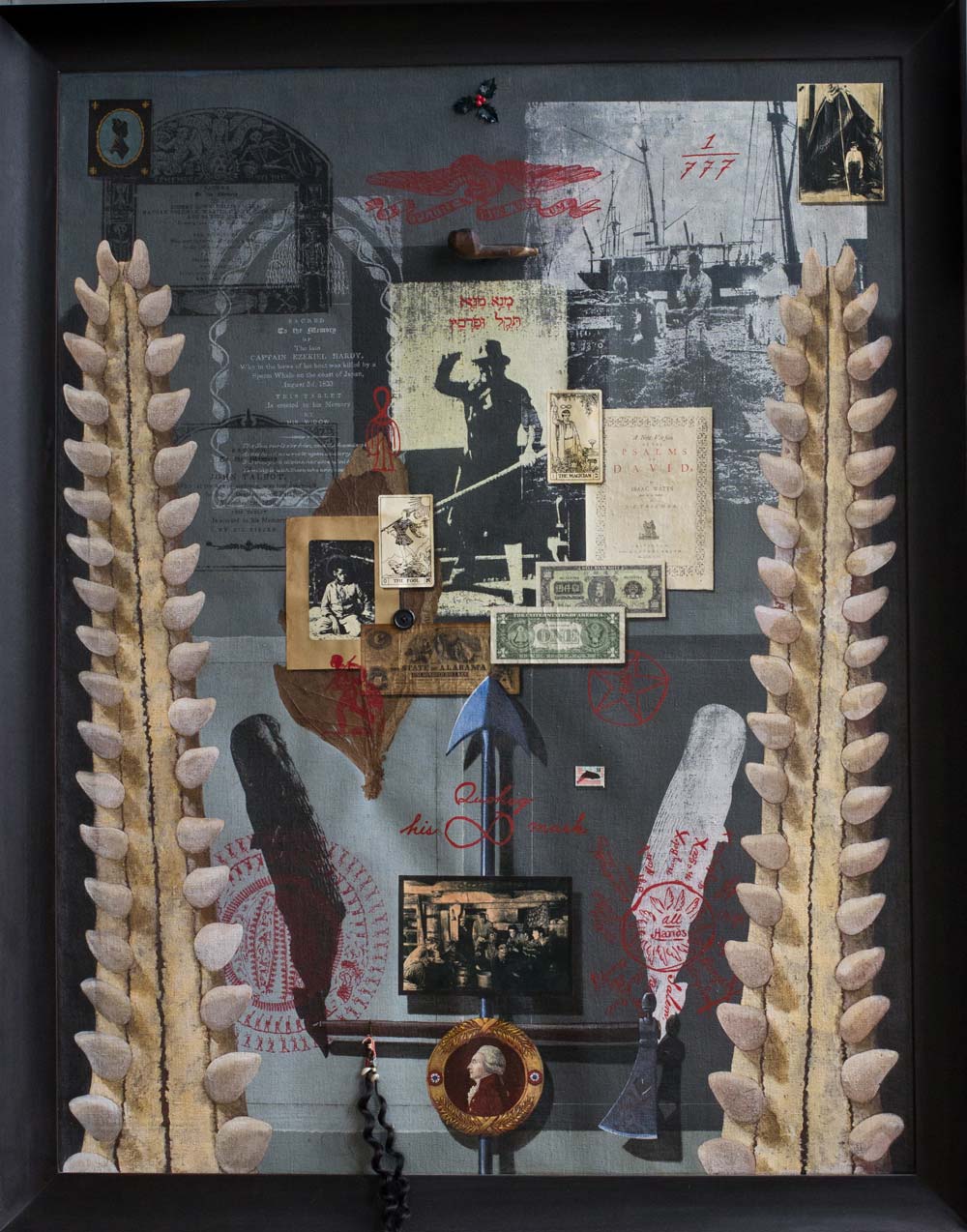 Underneath the American eagle, to the right of the harbour of New Bedford, it says: ‘E pluribus unum’: Out of many, one. It is an inversion of the metaphor as represented by the Anacharsis Clootz delegation of the title of the painting.
Melville compares the crew of The Pequod with an Anacharsis Clootz delegation from all the isles of the seas, and all the ends of the earth, to underline their great diversity.
Clootz was the son of a wealthy coal merchant from Amsterdam, who popped up during the French Revolution. He argued in the Assemblée Nationale for the equality of all nations. To enforce his argument, he surrounded himself with a group of poorly disguised actors with bad make-up, who were to represent the different races of the world. We can see Clootz’ portrait in the middle of the lower part of the painting.

On top of the small portrait of Clootz lies Queequeg’s tomahawk, a combination of a tobacco pipe and a battle-axe. This kind of tomahawk was popular amongst Indians at the end of the eighteenth century, but it was produced in England.

Melville was fascinated by circles and spirals, like the knot and the round figures above the tomahawk. To the right, we see the aforementioned petition by Melville, and to the left, we have a circularly drawn authentic record of the annihilation of a village of The Pequod Indians.

The banknote underneath the black dot, and the tobacco leaf under Pip’s photograph refer to Alabama. Pip is threatened to be sent back to the Alabama slave market if he does not behave well. The banknote next to it is a dollar, shown here because of the masonic symbolism that regularly surfaces in Moby Dick. The banknote underneath represents the symbolic obol to pay off the guardians of the underworld. To the right, we see the psalm book of Isaac Watts, of which a copy was presented to each sailor who put out to sea.
The sign above the tobacco leaf, which resembles a schematic representation of the womb, is an Isis symbol. Melville makes repeated references to Egyptian mythology. Behind the sign, there are the headstones of two sailors’ graves from the church of New Bedford. In the top left corner, we see Captain Ahab’s grass widow. In the top centre, we notice a branch of holly in reference to The Pequod leaving port on Christmas day.

Melville categorized the family of whales on the basis of book sizes. And so, sperm whales are compared to folios (on either side of the etching), and porpoises, the smallest whales, to duodecimos, i.e. the size of a stamp.

The First Lowering of the Boats (chapters 35–51), etching
Scroll to top