Nantucket was the island from where Ishmael, the principal character of the novel, embarked on his whale fishing journey. At the centre of the etching, there is a red map of Nantucket, which represents the original distribution of the indigenous tribes on the island. In the background, Reuvers has reproduced the title page of the first edition of Moby Dick.

Underneath the opening words of the book ‘Call me Ishmael’, there is a portrait of Melville and an old print of a whale sending a ship to the bottom.
Melville used a magical square to determine the key chapters of the book. Reuvers depicted the magic square of Jupiter with the portrait of Melville in the bottom right. The sum of the square, 136, equals the number of chapters, plus the epilogue of Moby Dick.

In The Spouter-Inn in New Bedford, Ishmael examines an array of deformed and broken whaling lances and harpoons, depicted here at the top of the etching. The harpoons were forged from soft iron so that a struck whale, in its struggle, would twist the iron, thus increasing its resistance in the water. The same effect was accomplished by attaching wooden boards to the line. 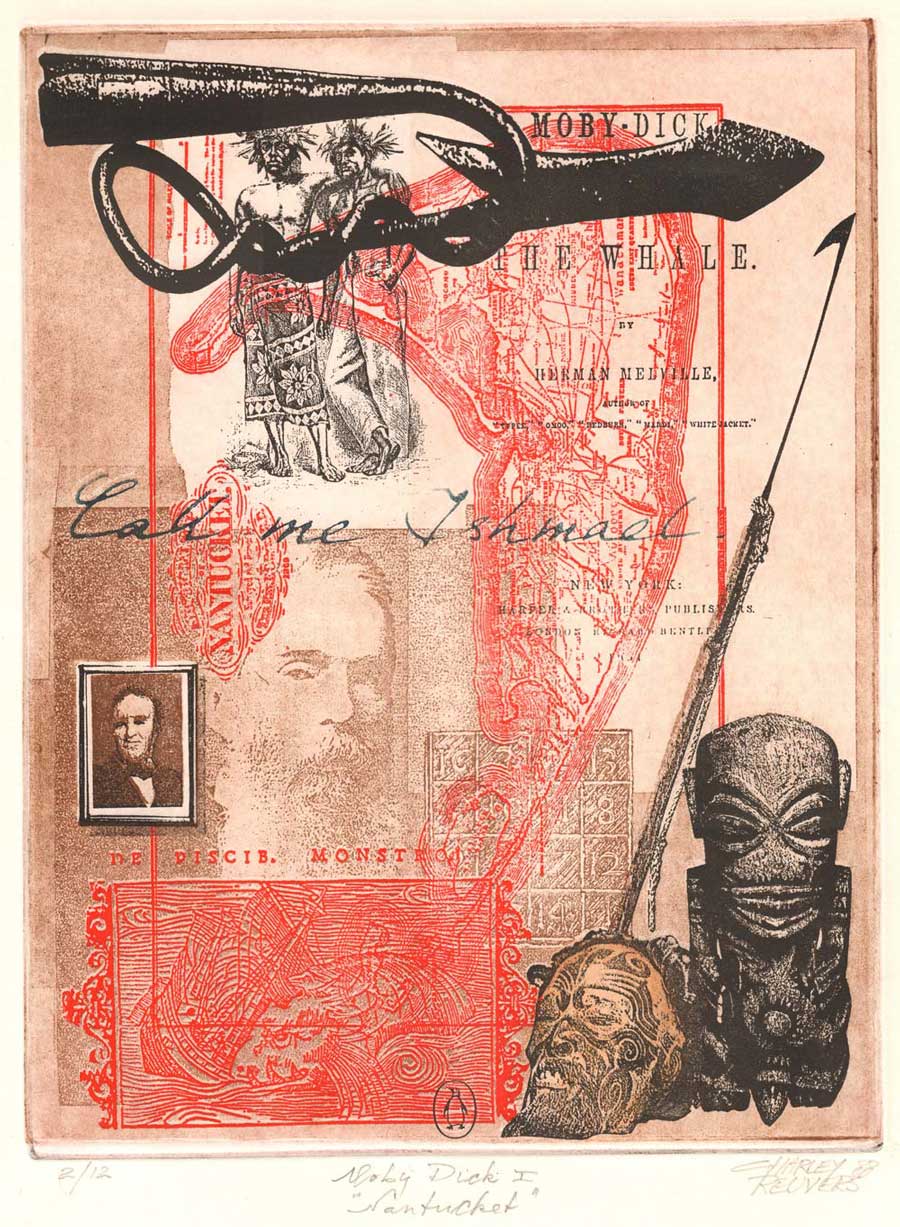 Ishmael is told that he has to sleep two in a bed with a cannibal from the South Seas. The cannibal, Queequeg, was peddling around town to sell a shrunken head, as seen in the bottom right. The sculpture next to it is a so-called Tiki, a small Tahitian idol. When Ishmael wakes up in the dead of night, he observes through a cleft between the blankets how Queequeg places a figurine in the ashes of the extinguished fireplace and performs a ritual.

The next day, Ishmael and Queequeg attend a service in the Whaleman’s Chapel. Melville based the character of the preacher, Father Maple, on two historical figures: the reverend Enoch Nudge and the pastor Edward Taylor. We see Taylor to the left of Melville.
The fraternization of Ishmael and Queequeg is represented by the two Tahitian sailors, in the top left, underneath the deformed harpoons.

My Substitute for Pistol and Ball (chapters 1–16), painting
Scroll to top