The unmistakable print of the whale’s fin

In a planisphere on the granite ceiling of an apartment of the great temple of Denderah in Egypt, Melville recognizes a swimming whale by its fin. This is depicted in green at the top centre of the painting.

Sailors call fulmars, seen at the bottom of the painting, Mother Carey’s chickens. The birds are considered an omen because they show up when there is a storm brewing. The churning water brings the plankton to the surface, which the fulmars are fond of. The St. Elmo’s fire that lights up the masts of The Pequod like candles is also a well-known indication of foreboding doom. Relieved against the ghostly blue-white light, the gigantic jet-black negro, Daggoo, loomed up thrice his real stature. The Yoruba oracle board, centred in the middle of the painting, refers to this scene. The rings in the woodcarving represent the heart of the universe’s dynamics, and forebode both Ahab’s ill-fated course and the fatal outcome of the story.

‘Seat thyself sultanically among the moones of Saturn, and take high abstracted man alone, and he seems a wonder, a grandeur, and a woe.’ In the top left, we see Saturn, the symbol of the proud, solitary Ahab. 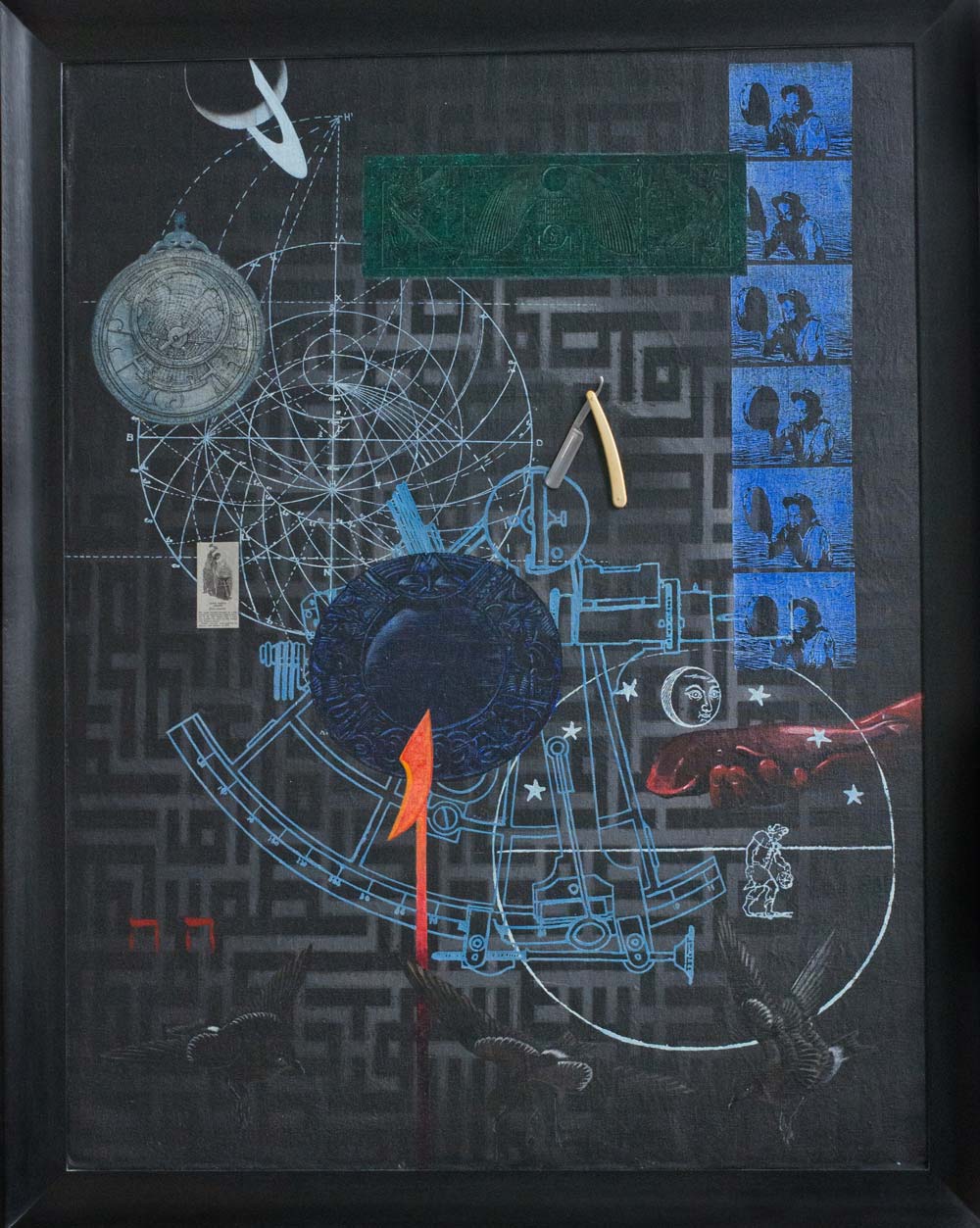 Ahab orders the blacksmith, Perth, to forge a toggling harpoon with barbs made from his razors. In the centre of the painting, we see the razor of Reuvers’ father. To the left, a Larousse picture of Lewis Temple. A former runaway slave, he became a blacksmith and adapted the toggling harpoon, which has a two-part point. When the harpoon is thrust into a whale, the top half of it detaches and twists horizontally under the skin of the animal, making it almost impossible to pull the rest of the attached harpoon out. Temple and Perth were both black blacksmiths – this is, just like the Manxman, another example of Melville’s great liking for wordgames.
In the painting, the orange harpoon thrusts out vertically. To the left of it: Hah! (‘HaHa’ in the Dutch translation; cf. Circumnavigating the World).

Fedallah and his people

Fedallah and his Islamic sailors form the crew of Captain Ahab’s whaleboat. Ahab recruited them for his personal hunt for Moby Dick without consulting the ship-owners, and then hid them in the hold. The Kufic calligraphy in the background of the painting refers to the Islamic crew. Fedallah, with his white turban and his protruding tooth in which a serpent’s head has been cut out, maintains a brooding, submissive relation with Ahab. He nurtures Ahab’s frenzy. In a previous chapter (no. 73) Stubbs and Flask suspect him of being the Devil who tries to seduce Ahab with a Mephisto-like offer to exchange his soul (or silver watch) for Moby Dick as his prize.
After an early evening hunt, Ahab’s whaleboat with its catch fails to reach the main ship before the dark of night. The men spend the night on the high sea in the company of the dead whale. Ahab confides to Fedallah that he dreamt of hearses, whereupon the Parsi swears to him that he will never end up in a coffin. Ahab can only be killed by hemp, and he will see two hearses before he perishes. The unlikelihood of such an event on the high sea encourages Ahab’s belief in his own immortality.

The oldest known navigation instrument is the astrolabe, the precursor of the quadrant and the sextant. Underneath Mercury, we see the image of an astrolabe; behind it, a disc from an astrolabe; underneath the disc, there is a line drawing of a sextant; and to the right, a stroller with an astrolabe under a night sky with the stars depicted on the doubloon. By trampling the quadrant, in his madness Ahab takes on the mighty forces of nature, the sun and, soon after, the lightning. He stubbornly refuses to acknowledge his own place.

When Pip leaps out of a whaleboat and gets entangled in the whale line, the crew can only save him by cutting the whale loose. Shortly afterwards, Pip jumps out of his skin and out of the boat again, but this time the sailors leave him behind in the boundless ocean. By the merest chance, the Pequod itself at last rescues him, but from that hour on Pip goes about the deck an idiot. He raves that he has seen God’s foot upon the treadle of the loom, and he only speaks about himself contemptuously in the third person. His insanity is diametrically opposed to Ahab’s madness, and his cowardice and self-disparagement to Ahab’s haughty egotism.
When Queequeg is seized with a fever, he wants a coffin to be made. He lies down in it with the iron of his harpoon, a small bag of woody earth scraped up in the hold, a flask of fresh water and his idol Yojo. Holding his tambourine, Pip bids him farewell with soft sobbings. Reuvers depicts Queequeg in a series of blue film stills, seen to the right of the painting. Underneath, the sperm whale foetus in a bloody hand refers to the Measurement of the Whale’s Skeleton.

The Chase (chapters 120–135 and the Epilogue), etching
Scroll to top