Queen Anne’s farthing is mentioned in the chapter Fast-Fish and Loose-Fish, in which the world is divided into hunters and prey. In the eye of the skull, seen at the bottom right, Reuvers has depicted the ferryman’s obol for passage across the river Acheron. In the background of the painting hangs a large, threatening net. It closes on The Pequod and on Ahab, who gets caught up by a loop in the line, and thus comes to his end by hemp.

One night, the watch of The Pequod is startled by a plaintive, wild and unearthly cry ‘like the half-articulated wailings of the ghosts of all Herod’s murdered Innocents.’ In the oval frame, to the far right in the background, we see a reproduction of a print about the massacre of the Innocents by Jac. Callot. The feast of the Innocents is commemorated on December 28th, Reuvers’ birthday. On hearing the cry, the crew-members ‘all listened transfixedly, like the carved Roman slave’. As an illustration, Reuvers chose Michelangelo’s Dying Slave. To the left of the painting, in comparable blue-white, ‘the glittering mouth that yawned beneath the boat like an open-doored marble tomb’. 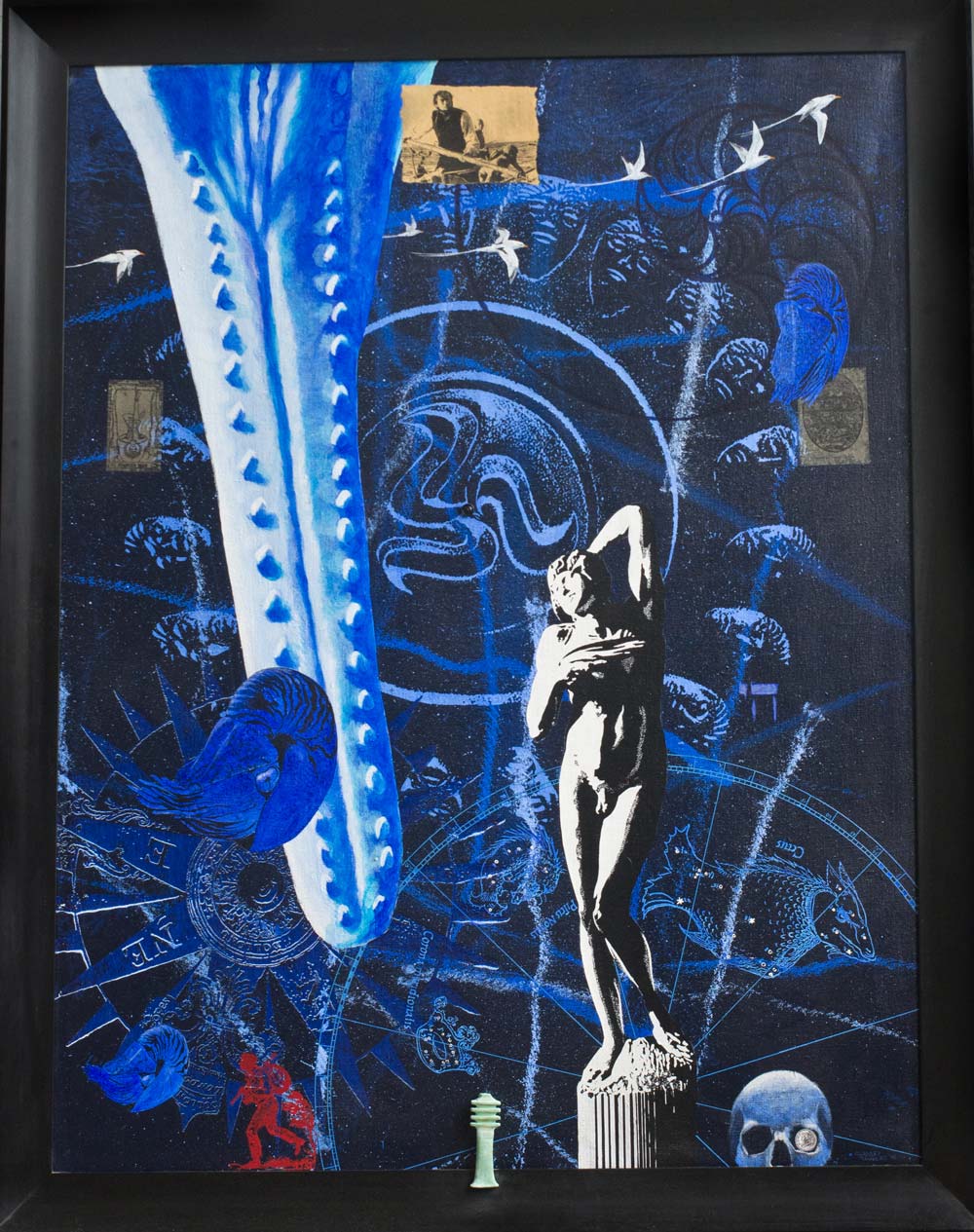 The birds, the needles

At the top of the painting, we see Ahab in a film still from John Huston’s motion picture Moby Dick. Underneath, we have the white tropicbirds that circle Ahab’s whaleboat just before Moby Dick rises for the first time during the hunt. Diagonally, from top right to bottom left, there is the aforementioned nautilus shells. In the bottom right, a celestial map with Ceteus, the zodiacal sign of the whale. To the left of that, we have the rose of a compass. After a nightly thunderstorm has turned the needles of the ship’s compass, Ahab takes the precise bearing of the sun and ascertains that the needles were exactly inverted.

The circle in the middle of the painting is a Celtic plate with heads around a spinning centre. This whirl refers to the vortex that takes The Pequod to the bottom of the ocean and carries Ishmael, ‘like another Ixion did I revolve,’ to his life-buoy. The rim of heads on the plate, resembling a skull necklace of Kali, refers to the demise of the ship’s crew. When the carpenter converts Queequeg’s coffin into a life-buoy, he contemplates attaching thirty separate Turk’s headed life-lines to it, each three feet long, hanging all around the coffin.

At the bottom centre, we see the pillar-like Djed and the sacrum of Osiris, an Egyptian symbol for eternity, with which Reuvers chose to conclude the underlying story of Moby Dick, the myth of Osiris.
At the bottom left, the picture of the runaway slave which shows a close resemblance with the tarot card of The Fool, Pip’s card. To the left, above the middle, the card of Ishmael, The Hanged Man. Less fatal than one would suspect: hanging upside down, the hanged man reflects on his life from a new perspective, which allows him to learn from his mistakes. Moby Dick provided both Ishmael and Reuvers with a new spiritual perspective. What would they learn from it? To the middle, on the right side, the hidden sign might give a clue, for it is an emblem of the Talmudic command to respect and appreciate life.